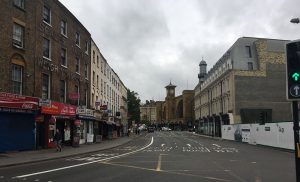 King’s Cross Station is one of the busiest transportation hubs in London with trains departing to all ends of England and to the continent. Every day thousands of commuters and tourists flock to the station not only to embark on their respective journeys but to experience the station’s vibrant history and other intriguing attractions as well, making it one of London’s must-see tourist destinations.

Here is a list of some exciting attractions in and around the King’s Cross Station.

Granary Square is home to over 1000 choreographed fountains, that dance and jiggles all day long bringing joy and pleasure to the thousands of visitors who come to visit the King’s Cross Station. The fountains are a spectacular sight, especially when it is all lit and animated at night. Located on the banks of Regent’s Canal, and in the heart of King’s Cross Station, the Square is not without a backstory/history of its own. It is said that the fountains were built where barges once unloaded their goods to sell in the city. Londoners and tourists alike enjoy this public square, as they laze along the steps enjoying the breeze of the fountains or sit on the canal steps and watch the boats pass by. Granary Square is also known for hosting special events such as the Floating Cinema that takes place all year around.

The British Library is the National Library of the United Kingdom and the home to more than 150 million catalogued items. It holds treasures such as the Magna Carta, Leonardo da Vinci’s Notebook to the original Beatles’ manuscripts. As a result, the British Museum has become a must-see tourist stop for ardent history and literature fans alike. The British library goes down in history as the largest building constructed in the United Kingdom in the 20th century and is only a few minutes away from the King’s Cross Station. The British Library is a national treasure on its own and its free to be enjoyed by the public where anyone over the age of 18 can pre-register online to access its services.

Founded in 2007, the Wellcome Collection is a collection of literature, and artwork all revolving around the world of medicine and health. The collection is advertised as “the free destination for the incurably curious” and attracts more than 500,000 visitors every year. The collection was founded by Sir Henry Wellcome, a great traveller and explorer who succeeded in amassing a magnificent collection of books, artwork, and artifacts on the medical world and its development which became the original Wellcome Historical Medical Museum back in the early 1900s. Today the Wellcome collection hosts a range of events from exhibitions and live shows to the more permanent library collection where visitors are invited and intrigued to think about connections between medicine, life, and art.

Looking for an adventure? An outlet to unleash your hidden detective powers? Then Hint Hunt’s live escape game if for you! This live experience game is designed for small groups of three to five people. You are locked inside a themed room with hidden clues, puzzles, and mysteries to be solved within 60 minutes of time in order to escape from the locked room. The games vary according to a theme and starting from £17 a ticket, the gamers can pick from either a classic detective style challenge named ‘JMs Office’, or travel to Tokyo and solve a Japanese themed mystery named ‘Zen Rooms’.

London is famous for its fondness of all things multi-cultural, which is especially depicted from the wide-spread of world cuisine that can be found in every nook and corner of this great city. Bar Pepito, which is the sister restaurant of Camino, is a vibrant watering-hole that showcases the delights of Spain and is a dedicated sherry bar. The bar boasts of a variety of sherry in all its forms that can be accompanied by Spanish delicacies and delicious tapas from the menu. And this intimate and traditional Andalusian bodega is a crowd favourite of Londoners and visitors alike for after-work drinks or just for a quiet night out.

Platform 9 ¾ needs little to no introduction to all Harry Potter fans out there. J.K.Rowling immortalized King’s Cross Station and platform 93/4s with her writing by locating the magical portal to the wizarding world in this iconic railway station. Visitors and commuters to the station can find Harry Potter’s train trolley wedged in the wall titled ‘platform 93/4’ making it essential for any ardent Harry Potter fan out there to stop and take a photo. And just opposite the wall is the Harry Potter shop, dedicated to all things Harry Potter and the wizarding world. So take a break from your journey, grab a snap with Harry Potter’s trolley, stock up on all your magical supplies and hop on your train – which unfortunately doesn’t lead to Hogwarts yet.

Located at King’s Cross is ‘The Pond Club’, one of London’s quirky tourist attractions, where nature meets the urban city. Londoners and tourists alike flock in masses to UK’s first man-made freshwater pond to swim, relax and experience nature in the middle of London’s urban mayhem. This man-made pond is part of the King’s Cross Arts Programme, titled “Of Soil and Water: King’s Cross Pond Club”, is 40 meters and was designed as a contemporary experiential art installation. The Pond Club provides all needed facilities such as changing rooms, lockers, showers, and lifeguards on duty, to guarantee all visitors a comfortable experience with the required safety measures. And the Viewing platform in the premises provides a breathtaking aerial view of the pond and the spectacular backdrop of King’s

Caravan is a restaurant and coffee roastery hailing all the way from Australia and New Zealand located overlooking Granary Square, that serves exquisite food in a trendy industrial style dining room. Caravan’s cuisine is inspired from all over the world and best enjoyed shared with your friends and loved ones. Choose from an exciting menu that includes dishes to share such as the deep-fried duck egg with baba ghanoush, or larger dishes like a hearty celeriac gratin with parsley, walnut, and brandy apple. Breakfast at caravans is a worthy experience as well, with a cup of their freshly roasted coffee, before you head over to explore the other wonders of the King’s Cross area.

Just a short distance from the King’s Cross Station is the churchyard of St. Pancras Gardens which was previously the graveyard of the old St. Pancras church. Today the Gardens have become a treasure trove for all history and literature enthusiasts alike as it is the burial place for many well-known figures. The origins of the church date back to the Roman Empire and in 1877 the churchyard was converted into a public garden in order to make way for the railway tracks. This task was entrusted to an architect named Arthur Bloomfield who enlisted the help of a young Thomas Hardy who later became a world-renowned writer. Visitors can also see the monument to Sir John Soane, the architect of the Bank of England, whose design for his own tomb inspired the now iconic red telephone box that can be seen all around London. Romance had its fair share in the gardens as well because it is when visiting her parent’s graves did Mary Goodwin, the future author of Frankenstein, met her future husband, Percy Shelley, the celebrated English romantic poet.

20 Things to do in and around Kings Cross St. Pancras
Top Restaurants and Bars in King’s Cross
Left Luggage Storage in Kings Cross
Time Through Kings Cross: The Past And Present
Top 10 Tourist Attractions in Kings Cross London
We use cookies to optimize your user experience. By browsing our website, you agree to the use of cookies