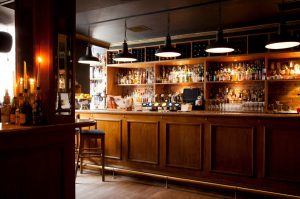 King’s Cross Station has undergone many redevelopments and reinventions since its inception way back in 1850, and the dining scene of King’s Cross has been through the same transformation from grubby little food stalls to shiny new restaurants located inside the railway station.  The new dining facilities in King’s Cross caters to all kinds of tastes, needs, and pocket sizes; as you can choose from warehouses converted into restaurants around Granary Square or the little hip cafes around lower Pentonville.

Here is a list of the best restaurants and watering holes in King’s Cross.

Craving for French delicacies and patisserie? Now there is no need to board the Eurostar and to dash off to France to indulge in some proper artisan French baked goods. Just come over to King’s Cross and pay a visit to Aux Pains de Papy, a rustic French Bakery just a stone’s throw away from the Eurostar terminal. Throughout the day the scrumptious smells of freshly baked croissants, crusty baguettes, quiches, and eclairs seeps out from the bakery attracting daily commuters and tourists alike. This family-run French bakery is a must try for everyone looking for their fill of French patisserie and baguettes in the comfort of London’s clear skies.

The Caravan restaurant located at King’s Cross is far different from the other Caravan outlets that can be found around the island. The location was once a Victorian grain store which has now been transformed into one of King’s Cross’s trendy eating spots. The interior has been designed with the building’s history in mind, as such the restaurant supports industrial themed dining set up, with concrete floors and exposed pipework. The restaurant may not be ideal for an intimate meet up but more for the communal, comradery sharing relationships. The food of Caravan is both exquisite and worldly as the dishes are inspired from cuisines all over the world. So be prepared to find dishes from lamb ribs with chermoula to Burmese chicken salad which will be served by a most effective and efficient staff.

This King’s Cross Restaurant – Dishoom is located inside an old warehouse near the railway station. This Indian restaurant boasts of spicy finger-licking Indian food, complete with ceiling fans, vintage Indian magazine ads on the walls that add to the retro surroundings. The restaurant is not without its loyal customers along with more new customers which result in long ques throughout the day. The food is phenomenal and some of the favorites are bhel pooris and biriyani. But you can’t go wrong by ordering anything in this much sought out dining spot.

The impressive transformation of King’s Cross from a seedy corner of London into an international gateway has led way for the installations of London’s most successful and creative businesses around this historically iconic railway station. One of the latest additions to King’s Cross vibrant and ever-growing restaurant line up is Fortnum & Mason Tea Salon, a royalty-endorsed tea room located inside St. Pancras station. Customers can find loose tea leaves, hampers, jams and marmalades in the gift shop section while the tea salon will be serving classic British savory dishes and afternoon tea.

The German Gymnasium was London’s first purpose-built gymnasium funded by London’s German population. But the gymnasium has now been transformed into being one of King’s Cross invaluable additions to the restaurant line up. German Gymnasium is now part of D&D London, an international group of restaurants and bars and it serves authentic rich German cuisine such as goulash soups, schnitzels, and strudels to diners all throughout the day. Thankfully the portions are restricted to fine dining standards so there is no need to hit the gym after the meal.

This fine dining establishment is located only a few yards away from the King’s Cross Station. Managed by world-renowned British Chef, Marcus Wareing, the Gilbert Scott restaurant showcases seasonal British food at its finest. The visitors are lucky to not only indulge in the exquisite dishes the restaurant has to offer but the breathtaking architecture as well that hails from the 19th century. The restaurant is also famous for the great British Sunday Roast – a grand tradition to be enjoyed in one of London’s iconic dining halls.

Granger and Co by renowned Australian chef Bill Granger, is one of King’s Cross most sought after eatery establishments. The Granger and Co’s dishes draw inspirations from all foodie fad and fashion that’s making its rounds in the trendy atmospheres. But it is also well known for its relaxed and easygoing vibe that serves up his classic signature dishes such as the shrimp burger, zingy salads like raw tuna and avocado with brown rice and its phenomenal brunches served on alfresco tables on a quiet piazza.

Itadaki Zen breaks the normal conventional Japanese cuisine that is centered around fish to a more vegan approach. As such when you walk into Itadaki Zen, located just yards away from King’s Cross Station, you can expect to be served Japanese soups, sushi, and tempura that are 100 percent vegan! The restaurant possesses a quiet, tranquil Zen-like atmosphere while serving dishes centering around their key ingredients such as rice, root vegetables, seaweeds, and soybeans. The restaurant often hosts cultural artistic events and workshops, such as art exhibitions and live music that attracts many visitors, who come not only to indulge in the healthy, organic, vegan food but to enrich themselves through the cultural experiences at offer.

Kerb is a street food establishment that pitches their stalls on Granary Square from Wednesday to Friday during lunchtime, serving up some truly exciting and scrumptious street food. Each day 7 traders pitch up and the stalls rotate so there is always something new and exciting to try whenever you pay a visit. From favorites – Mother Flipper and the Kimchinary to Afghani dumplings and malted chocolate whoopee pies, there is no telling what new exciting street food would pop-up next. The motto of Kerb is ‘making cities taste better’, and they certainly have not disappointed so far.

The Lighterman, named after the workers who operated ‘lighters’ on London’s waterways, is a popular dining room and bar located in King’s Cross. The building is three floors with floor-to-ceiling windows that overlook a spectacular view over the Regent’s canal and Granary square. The open kitchen serves up modern British cuisine from organic spelt flatbreads and chips in weeny metal baskets to marinated surf and turf cooked on a wood-fired grill.

Plum and Spilt Milk is located just a few meters from the Eurostar terminal in King’s Cross Station and is a perfect addition to the King’s Cross dining scene with its elegant and relaxed atmosphere. Highly acclaimed chef Mark Sargeant is in charge of this luxurious dining room where he serves an exquisite menu based on seasonal British ingredients. Settle into the sublime hand-made furniture and indulge in Mark Sargeant’s reinvented British dishes such as potted rabbit or cod with creamed celeriac and curried mussels.

Vinoteca is a wine bar that is serious about its wine while serving some exquisite British and European inspired dishes using fresh seasonal produce. Vinoteca is a welcome addition to the King’s Cross restaurant and bar scene with its range of 200 and more wine list, which are available as boxed wines, kegged wines, poured-from-tap wines and wine bottles that can be taken away. So order your food and wine and enjoy it while sitting at the terrace overlooking King’s Boulevard: what could be more perfect?

20 Things to do in and around Kings Cross St. Pancras
Top Restaurants and Bars in King’s Cross
Left Luggage Storage in Kings Cross
Time Through Kings Cross: The Past And Present
Top 10 Tourist Attractions in Kings Cross London
We use cookies to optimize your user experience. By browsing our website, you agree to the use of cookies